Who says Unicorns are mythical creatures? Don’t listen to them. Unicorns are indeed magical but very much real. We mustn’t let anyone tell us otherwise! If you’re obsessed with unicorns, you’ll fall in love with these Unicorn quotes!

I recently learned that the national animal of Scotland is the Unicorn and I’m a total fan of whomsoever did this. I also found out that the concept of Unicorns was first unveiled during the ancient Mesopotamian era in India and China.

Unicorns have been a subject of fascination to many, especially kids and teens. Their whimsical aura, gorgeous silky hair, and of course the tell tale alicorn forms an attractive set of features. Unicorns are like horses, but much more amusing and mystic.

Today, anything that has unicorns on it is sold like hot cakes. Everyone loves unicorns. Unicorn backpacks, pencil cases, headphones, hair bands – you name it! 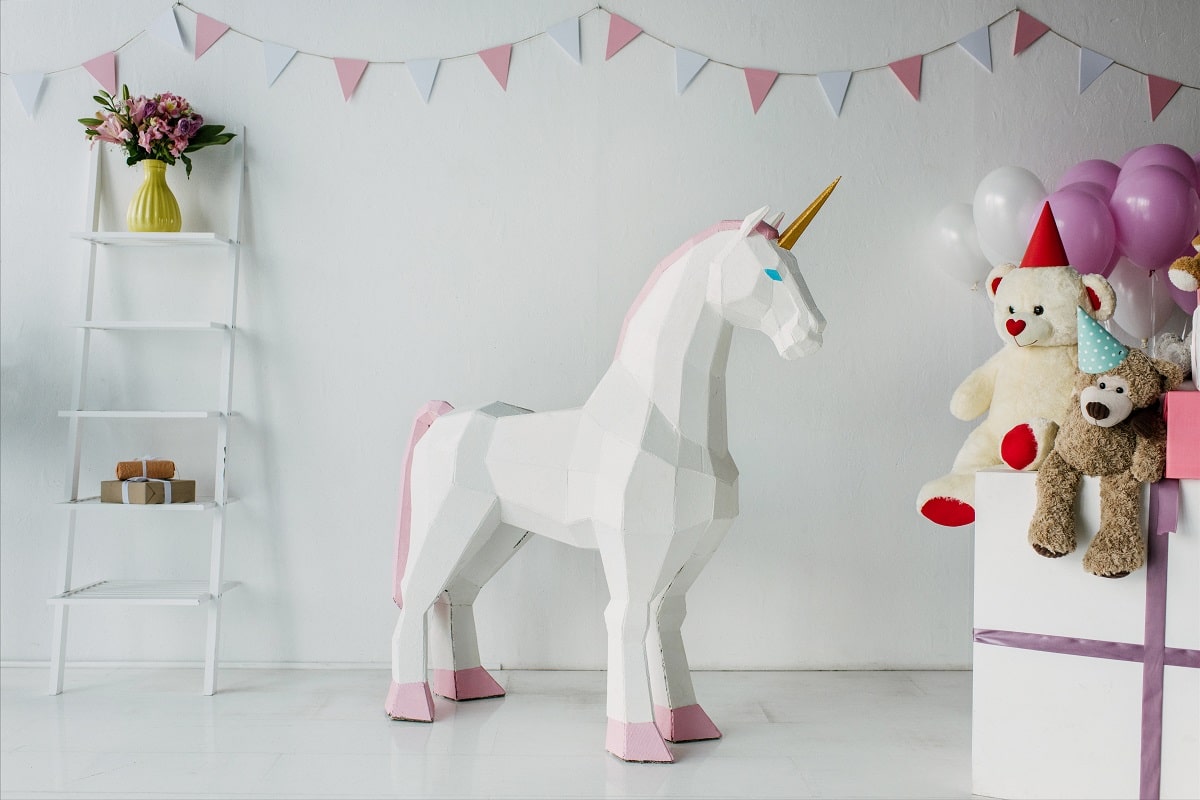 Are you head over heels for Unicorns? Then you’ll enjoy reading these cute Unicorn quotes.

1. “I think that if you have a horse, pegasus, qilin, or unicorn, you should sit on it! You should stroke its hair, whisper in its ear, be one with it! And you shouldn’t feel sorry if other people don’t have one.”

2. “He knew what she wanted, and he wanted it, too; he was ready, but not, despite her gorgeousness, with tiglah. Tiglah was not worth losing his ability to touch a unicorn.”

3. “Unicorns practically breathed magic. He was to a horse what a horse was to a pig, four tiny cloven hooves shone like burnished silver, slender legs as graceful as an antelope’s led to a slender body, a delicate neck with an arch like the stem of a lily-blossom and a head like the blossom itself, crowned with that glorious pearly horn. And the eyes- big golden-brown eyes you could fall into and never come out of.”

5. “Toads are to dragons what carrots are to unicorns.”

6. “The question of historicity and actuality with regard to Gods and unicorns is a relatively trifling matter which may be left to antiquarians and biologists, for both the God and the unicorn had a business to perform greater than any mere existence in the flesh could explain or provide a basis for.”

7. “I’m actually quite obsessed with unicorns. They are in essence a mythical creature. The unicorn is born magical and it’s not the unicorn’s fault and it doesn’t make it any more or less special or any less unique but it can’t help that it was born with that magic.”

8. “Now I will believe that there are unicorns.”

9. “I thought unicorns were more… fluffy.”

10. “It’s not a unicorn – it’s a horse with a sword on its head that protects my hopes and dreams.”

11. “I suppose I could understand it if men had simply forgotten unicorns, but not to see them at all, to look at them and see something else – what do they look to one another, then? What do trees look like to them, or houses, or real horses, or their own children?”

12. “This is the violet hour, the hour of hush and wonder, when the affections glow and valor is reborn, when the shadows deepen along the edge of the forest and we believe that, if we watch carefully, at any moment we may see the unicorn.”

14. “Do you know, I always thought unicorns were fabulous monsters, too? I never saw one alive before! ‘Well, now that we have seen each other,’ said the unicorn, ‘if you’ll believe in me, I’ll believe in you’.”

– Lewis Carroll, ‘Through The Looking Glass’.

16. “The unicorn, she said, was a marvelous beast, shining with honor, wisdom and strength. Just to see him strengthened the soul.”

17. “Unicorns are immortal. It is their nature to live alone in one place: usually a forest where there is a pool clear enough for them to see themselves — for they are a little vain, knowing themselves to be the most beautiful.”

18. “What do men know? Because they have seen no unicorns for a while does not mean we have all vanished.”

20. “… no place is more enchanted than where a unicorn has been born.”

21. “I would compete in unicorn back riding! Why? Because we are from the same fairytale.”

22. “There is something about riding a unicorn, for those people who still can, which is unlike any other experience: exhilarating, and intoxicating, and fine.”

23. “We are not always what we seem, and hardly ever what we dream.”

24. “Make your life story so amazing that unicorns have trouble believing it is true.”

25. “Most people say, show, don’t tell, but I stand by show and tell, because when writers put their work out into the world, they’re like kids bringing their broken unicorns and chewed-up teddy bears into class in the sad hope that somebody else will love them as much as they do.”

26. “Heroes know that things must happen when it is time for them to happen. A quest may not simply be abandoned; unicorns may go unrescued for a long time, but not forever; a happy ending cannot come in the middle of the story.”

27. “Sorry… I got distracted listening to you and hot glued myself to my unicorn.”

28. “Poetry is news brought to the mountains by a unicorn and an echo.”

29. “Everything today has been heavy and brown. Bring me a unicorn to ride about the town.”

30. “It cannot be an ill fortune to have loved a unicorn.”

Related:   80 Time Flies Quotes To Help You Live In The Now

32. “‘Do you know, I always thought unicorns were fabulous monsters, too? I never saw one alive before!’

– Lewis Carroll, ‘Through the Looking Glass’.

33. “Unicorns don’t care if you believe in them any more than you care if they believe in you.”

34. “God himself must needs be traduced, if there is no unicorn in the world.”

35. “All the beasts obeyed Noah when he admitted them into the ark. All but the Unicorn. Confident of his own abilities, he boasted ‘I shall swim’.”

36. “’Unicorns,’ she whispered. Rahela nodded. The most beautiful of all the Mother’s children.”

– Jennifer Roberson, ‘The Court Of The Summer King’.

37. “…I can o’ersway him; for he loves to hear that unicorns may be betray’d with trees, and bears with glasses, elephants with holes, lions with toils and men with flatterers.”

38. “You try reading fantasy books all your life – have a unicorn walk by your bus bench on a hot day, with everything you’ve ever wanted tied up in a neat bundle- and see if you wouldn’t do almost anything to have it.”

39. “There was no violence, no speed. It moved to the rhythm of an elder dance, putting all the rituals of the world to shame. Black, silver, gold and moon-opal, night and sea, fire, earth, air and water.”

40. “When God created the earth, He made a river which flowed from the Garden of Eden… then told Adam to name the animals… and the first animal he named was the unicorn. When the Lord heard the name Adam had spoken, he reached down and touched the tip of the single horn growing from the animal’s forehead. From that moment on, the unicorn was elevated above other beasts.”

41. “Today it is said that the unicorn never existed. However, it is marvelously clear that when the unicorn was first described and centuries later when the tapestries were woven, everyone believed in unicorns.”

– Marianna Mayer, ‘The Unicorn And The Lake’.

42. “Real magic can never be made by offering someone else’s liver. You must tear out your own, and not expect to get it back.”

43. “Of all the legendary animals of art, folklore and literature, the unicorn is the one with the greatest hold on our imaginations. Other fabulous beasts are clearly inventions, existing only in a mythical landscape of our own collective creation, but the unicorn strikes us as more than imaginary. It seems possible, even probable – a creature so likely that it ought to exist.”

45. “The unicorn is not known for its horn, beauty, or purity; but for its strength and courage as one.”

46. “The last unicorn wasn’t really the last. And maybe she still isn’t.”

47. “Be a diamond-studded unicorn; unbreakable & unique.”

Related:   80 Best Tinder Pick-up Lines That Are the Perfect Icebreakers

50. “Why a unicorn? Maybe the unicorn, too, is one of the men without women.”

51. “Be realistic with your expectations. I’d really like to cuddle a unicorn, but it ain’t going to happen.”

52. “Hey, I like unicorns. Unicorns are just weaponized ponies.”

53. “It’s like learning to ride a unicorn. You never forget.”

54. “… my conscience has the same hard reality as a unicorn.”

56. “Never pretend to be a unicorn by sticking a plunger on your head.”

58. “Everyone says social media is a unicorn, but maybe it’s just a horse?”

59. “Don’t you love it that Prince doesn’t use Twitter? Don’t you think he’s somewhere on a unicorn?”

61. “So you’re a real person! I always thought you were a legendary figure, like unicorns or Giuseppe Verdi.”

62. “I found the hum of his computer rather soothing, but it was the complete lack of unicorn carcasses that really pulled the room together.”

63. “I’ve never seen a unicorn couple. He — it has to be a he, right? — is always alone, sharp horn thrust toward the sky. Maybe we should adopt him as the symbol of men without women, of the loneliness we carry as our burden, or perhaps we should sew unicorn badges on our breast pockets and hats, and quietly parade down streets all over the world.”

64. “Let us only hate hatred; and once give love a play, we will fall in love with a unicorn.”

66. “That is exactly what heroes are for. Wizards make no difference, so they say that nothing does, but heroes are meant to die for unicorns.”

67. “The unicorn was white, with hoofs of silver and graceful horn of pearl… the glorious thing about him was his eye. There was a faint bluish furrow down each side of his nose, and this led to the eye sockets, and surrounded them in a pensive shade. The eyes, circled by this sad and beautiful darkness, were so sorrowful, lonely, gentle and nobly tragic, that they killed all other emotions except love.”

68. “Let us only hate hatred; and once give love a play, we will fall in love with a unicorn.”

70. “Why a unicorn? Maybe the unicorn, too, is one of the men without women.”

71. “Be a diamond-studded unicorn; unbreakable & unique.”

72. “A wise man never plays leapfrog with a unicorn.”

73. “The unicorns were the most recognizable magic the fairies possessed, and they sent them to those worlds where belief in the magic was in danger of falling altogether. After all, there has to be some belief in magic- however small- for any world to survive.”