If you are from Colorado, you will be well aware of its natural beauty, incredible landscapes, wildlife, and picturesque views. Its views are unforgettable, and visiting should be on everyone’s bucket list. It is home to landforms, mountain peaks, lakes and rivers.

Why is this important? Well, often, these stunning views can act as perfect backdrops for a host of quotes, and believe it or not, there are plenty of quotes relating to Colorado that we think you ought to know!

This article brings you more than 50 quotes on Colorado, all different unique, just like the Centennial State! But first, let’s address one or two important things before diving into any quotes.

Colorado is located in the US. It is seen as one of the Mountain states and over half of its surface area lies within the Rocky Mountains themselves, hence the stunning views! It is bordered by the states of Wyoming and Nebraska and Kansas, Nebraska, New Mexico, and Utah. So it is safe to say that it is pretty central.

• The state itself was named after the Colorado River
• The state’s capital is Denver
• The state is nicknamed the Centennial State because it joined the Union in 1876, a century after the US declared independence.
• Denver, in Colorado, is known as the ‘Mile High City’ because it is 5,280 feet above sea level, which is exactly one mile.
• Women in Colorado were granted the right to vote in 1893. 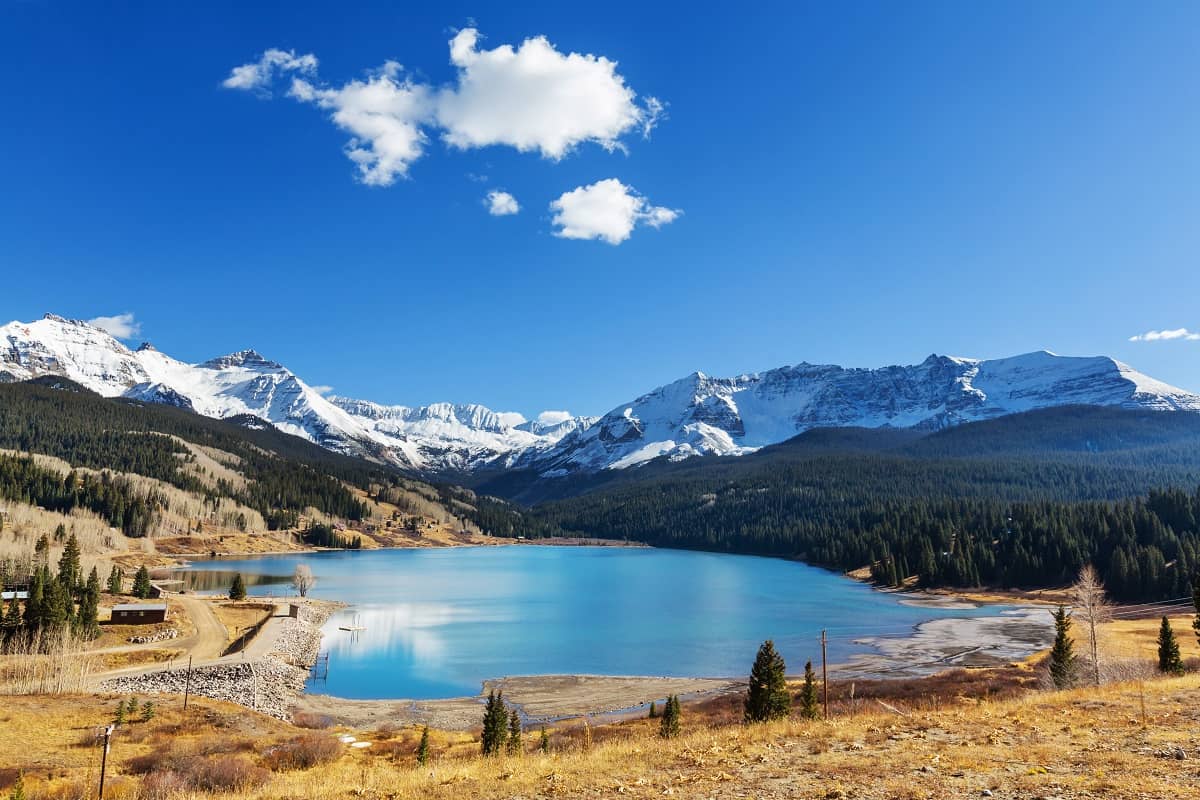 “Colorado has always been a good place to find what you’re made of.” – John Hickenlooper

“A crystal clear Colorado sky opens above us, a blue so deep it makes you dizzy. The occasional bright white wispy cloud dances across the firmament, punctuating the deep blue vault of heaven stretching over this paradise.” – Neil Hanson

“Colorado is an oasis, an otherworldly mountain place.” – Brandi Carlile

“Do what we will, Colorado will one day find an unimpeded way to the sea.” – Donald Worster

“It’s just the way it is. The sky is blue, the sun is bright, and Aspen endlessly loves America. It’s how the world was designed to be.” – Kiera Cass

Related:   50 Dream Big Quotes That Will Inspire You To Aim For The Stars

“I love you, Aspen. You’ll always be my prince.” – Kiera Cass

“Boulder should be next to the word ‘community’ in the dictionary.” – Kimbal Musk

“In my native Boulder County, Colorado, the fracking fanatics are out in force. They are marching door-to-door, petitions and mythology in hand, and they are storming city council and county commissioner meetings.” – Bob Beauprez

“As early as I can remember, I wanted to be a snowplow driver. When you grow up in the Rocky Mountains, like I did, you see the snow drifts piled up six feet high, and you’re two feet, so it’s impressive.” – Kip Thorne

“The Rocky Mountains realize – nay, exceed – the dream of my childhood. It is magnificent, and the air is life-giving.” – Isabella Bird

“Is there climate change? I live in the shadow of some of the greatest climate change the world has ever seen. It’s called the Rocky Mountains. When the glaciers went back.” – Scott Tipton

“In Boulder entrepreneurship circles, there is a genuine desire to see others succeed and a general belief that karma matters. There’s a sense that together we’re building something here, and that we’re all a meaningful part of it.” – David Cohen

“Strong community and mentorship are the lifeblood of any successful entrepreneurial ecosystem, and it’s exciting the Boulder is showing the world just what sort of impact these things can actually have.” – David Cohen

“I had my house converted to the Colorado altitude, so I am always above sea level.” – Unknown

“If you want to see an awesome color, then go to Colorado it’s beauty is like no others.” – Unknown

“We are on the Colorado…that means something more to me than thoughts of electrical power or a harnessed river.” – Unknown

“You don’t need missionaries in Colorado; you got Colorado.” – Trey Parker

“I’m grateful for anything that brings me back to Colorado.” – Sheryl Lee

“One day the Constitution of Colorado is the highest law of the state. The next day it’s waste paper.” – Robert F. Williams

“The Rockies are therefore very young and should never be thought of as ancient. They are still in the process of building and eroding, and no one today can calculate what they will look like ten million years from now. They have the extravagant beauty of youth, the allure of adolescence, and they are mountains to be loved.”? James A. Michener

“Under the rough and ridiculous circumstances of life in the Rocky Mountains there was something exciting and vital, full of rude poetry: the heartbeat of the West as it fought its way upward toward civilization.”? Wallace Stegner

“I was hiking a five-day loop – alone – in the Rocky Mountains when I rounded the switchback and saw a large body on the trail ahead. It had brown fur with a cinnamon tinge that was covered across dense, humped back muscle. A broad head lifted and I could see the dish-shaped muzzle was catching my scent. I knew bears. This was a grizzly.” – Claire Cameron

“What’s happening on the Colorado River is happening all over the world. The water is overused, over dammed, and it’s polluted in some places.” – Greg MacGillivray

“Colorado springs is one of the best places in the world to see the history of the Earth.” – Kirk Johnson

“[The Colorado River] exploration was not made for adventure, but purely for scientific purposes, geographic and geologic, and I had no intention of writing an account of it, but only of recording the scientific results.”— John Wesley Powell

“The landscape everywhere, away from the river, is of rock—cliffs of rock; plateaus of rock; terraces of rock; crags of rock—ten thousand strangely carved forms; rocks everywhere, and no vegetation, no soil, no sand. In long, gentle curves the river winds about these rocks.” — John Wesley Powell

“There’s a silent voice in the wilderness that we hear only when no one else is around. When you go far, far beyond, out across the Netherlands of the Known, the din of human static slowly fades away, over and out.” – Rob Schultheis

“I think the Colorado Plateau is the most scenic area in the world – let’s begin with that. Not just the United States.” – Stewart Udall

“I think about my dwindling anonymity, and that’s really scary because a very large part of me would be perfectly happy living on a ranch in Colorado and having babies and chickens and horses – which I will do anyway.” – Dakota Johnson

“I love hiking in the mountains in Aspen. Breathing the clean, fresh air is great. Plus, it gives me a cardiovascular workout and firms my legs.” – Chris Evert

Related:   30 Beautiful Happiness Quotes To Bring Positivity To Your Life

“It’s just the way it is. The sky is blue, the sun is bright, and Aspen endlessly loves America. It’s how the world was designed to be.” – Kiera Cass

“I love you, Aspen. You’ll always be my prince.” – Kiera Cass

“My favorite Aspen memory is saving an upside-down cake that burst from the high altitude.” – Emeril Lagasse

“Next to filmmaking and stuff like that, skiing is my favorite thing. I go skiing in Aspen – everywhere. I have been skiing since I was 4. I just love it. I feel so free.” – Sage Stallone

“Whenever we can, we tend to use debt to fund deals, as Aspen is very cash generative, so it doesn’t make sense to issue equity. Over time, we can eliminate debt.” – Stephen Saad

“And there in the blue air I saw for the first time, far off, the great snowy tops of the Rocky Mountains. I had to get to Denver at once.” – Jack Kerouac

“Growing up in Denver, I’m sure it started with loving the Colorado mountains.” – Gale Norton

“I’m from Denver, and there is really nothing acting-wise to do there except for theater. I did everything I could get my hands on until I was able to make it to L.A.” – Madisen Beaty

“We just love Denver. The love and support from people here is amazing.” – GriZ

“Denver is a city that will be far more defined by its future than its past.” – John Hickenlooper

“Denver is home to me, and to be recognized for my achievements in the sports community here is a great honor.” – Carmelo Anthony

“Given that, and assuming that we begin to adjust to issues like climate change and the greenhouse effect, Denver’s location in the center of the country becomes a tremendous advantage.” – John Hickenlooper