Autumn, also known as Fall, is arguably the most beautiful of the four seasons.

It’s during autumn that the natural landscape transforms from its traditional greenery to a colorful spectacle. This season is also characterized by trees shedding their foliage, exposing their sheer grandeur. The falling vegetation magically carpets our streets, pavements, and patios, adding a magical contrast to our surroundings.

The cooler autumn weather is considered by many as the ideal time to rock in their favorite fashion accessories. That might explain why many fashion trends tend to emerge during this season.

But the weather and vegetation changes during autumn aren’t the only things to love about this season. Fall also signals changes in moods, vibes, and initiatives. For instance, many romantic escapades begin in autumn.

Another thing to love about autumn is that travel is relatively cheaper. That’s because fall is considered off-season or shoulder season in numerous locations worldwide. What’s more, there are plenty of holidays and festivals traditionally marked during this season. The most notable ones are Halloween and Thanksgiving Day.

Evidently, there are numerous reasons to celebrate fall. And as you shall find, there are equally many quality ways to while autumns away. One is by dedicating heartfelt fall quotes to yourself as well as your dear ones.

Autumn quotes are a great way to embrace the last quarter of what was a fairly long year. Most of these quotes are nature-oriented. They serve as a reminder of Mother Nature’s stunning beauty, the same that comes alive during fall. Some autumn quotes also resonate with the holidays and festivals typically celebrated during this season. Instead of simply wishing your loved ones, say, a Happy Halloween, why not weave in some autumn-themed sentiments to make their Halloween even more special? 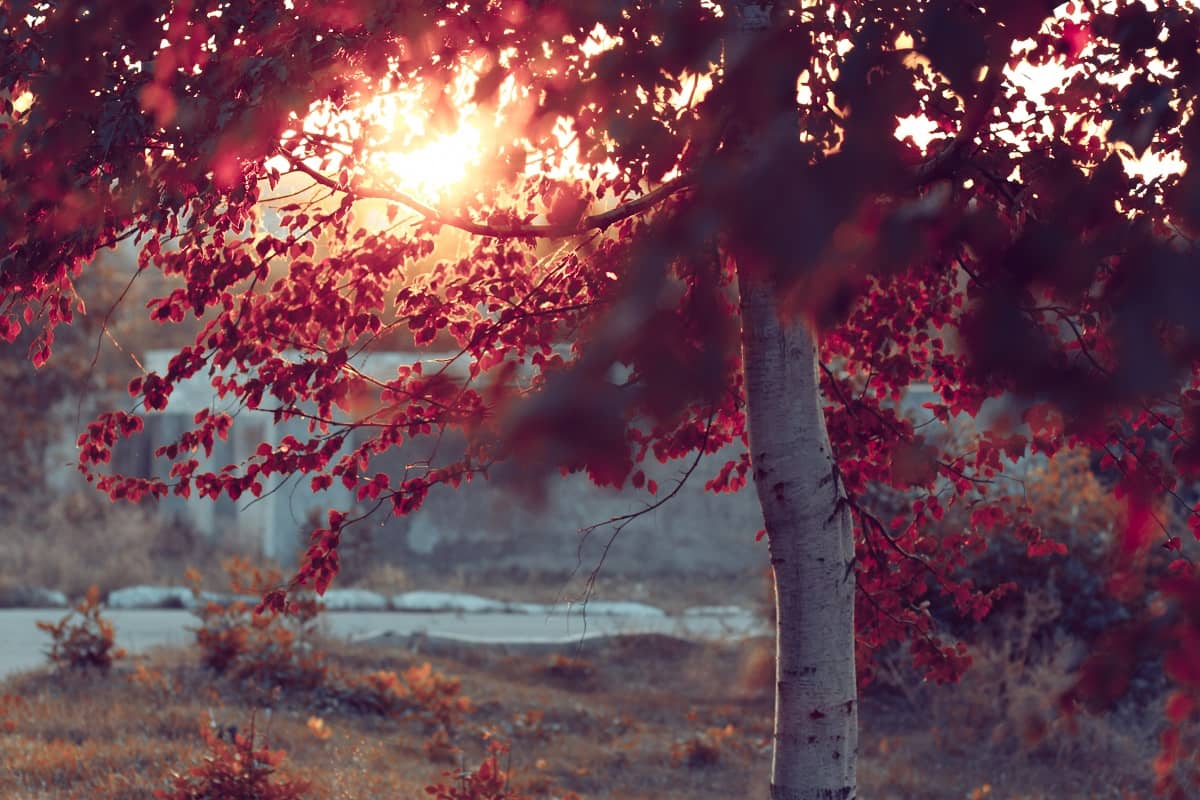 If looking for the perfect quotes to capture the beauty and mood of fall, you’re in luck. Listed below are 80 best autumn quotes ever.

1. “Then the trees, after their long silence, began to talk again, in yellow and red. And the days began to shrink under one’s very eyes.” – Mirrlees

2. “Autumn! The greatest show of all times!” – Mehmet Murat Ildan

3. “Summer is leaving silently. Much like a traveler approaching the end of an amazing journey.” – Darnell Lamont Walker

5. “Is not this a true autumn day? Just the still melancholy that I love—that makes life and nature harmonize.” – George Eliot

6. “There is a harmony in autumn, and a luster in its sky, which through the summer is not heard or seen, as if it could not be, as if it had not been!” – Percy Bysshe Shelley

7. “Autumn is the season to find contentment at home by paying attention to what we already have.” – Unknown

9. “Every leaf speaks bliss to me, fluttering from the autumn tree.” – Emily Brontë

10. “Winter is an etching, spring a watercolor, summer an oil painting, and autumn a mosaic of them all.” – Stanley Horowitz

11. “I loved autumn, the season of the year that God seemed to have put there just for the beauty of it.” – Lee Maynard

12. “Fall has always been my favorite season. The time when everything bursts with its last beauty, as if nature had been saving up all year for the grand finale.” – Lauren DeStefano

13. “Dancing of the autumn laves on a surface of a lake is a dream we see when we are awake.” – Mehmet Murat Ildan

15. “Autumn that year painted the countryside in vivid shades of scarlet, saffron, and russet, and the days were clear and crisp under the harvest skies.” – Sharon Kay Penman

16. “And when you take something like the changing colour of autumn leaves and start to ask why; you’re starting off on an intellectual journey which will take you beyond that moment of visual satisfaction while robbing nothing from that experience.” – Alice Roberts

17. “The tints of autumn…a mighty flower garden blossoming under the spell of the enchanter, frost.” – John Greenleaf Whittier

If you’re enjoying these quotes, make sure to read our collection of garden quotes about the power of nature.

18. “How beautiful the leaves grow old. How full of light and color are their last days.” – John Burroughs

19. “There is something incredibly nostalgic and significant about the annual cascade of autumn leaves.” – Joe Wheeler

22. “Autumn seemed to arrive suddenly that year. The morning of the first September was crisp and golden as an apple.” – J.K. Rowling

23. “Love the trees until their leaves fall off, then encourage them to try again next year.” – Chad Sugg

24. “The heat of autumn / is different from the heat of summer / One ripens apples, the other turns them to cider.” – Jane Hirshfield

25. “The spring, summer, is quite a hectic time for people in their lives, but then it comes to autumn, and to winter, and you can’t but help think back to the year that was, and then hopefully looking forward to the year that is approaching.” – Enya

26. “Anyone who thinks fallen leaves are dead has never watched them dancing on a windy day.” – Shira Tamir

27. “Autumn arrives in early morning, but spring at the close of a winter day.” – Elizabeth Bowen

28. “Autumn leaves are falling, filling up the streets; golden colors on the lawn, nature’s trick or treat!” – Rusty Fischer

29. “And the sun took a step back, the leaves lulled themselves to sleep and autumn was awakened.” – Racquel Franco

30. “Autumn shows us how beautiful it is to let things go.” – Unknown

31. “Autumn is a second spring when every leaf is a flower.” – Albert Camus

32. “…I cannot endure to waste anything so precious as autumnal sunshine by staying in the house. So I have spent almost all the daylight hours in the open air.” – Nathaniel Hawthorne

33. “I can smell autumn dancing in the breeze. The sweet chill of pumpkin, and crisp sunburnt leaves.” – Ann Drake

34. “Notice that autumn is more the season of the soul than of nature.” – Friedrich Nietzsche

35. “October, baptize me with leaves! Swaddle me in corduroy and nurse me with split pea soup. October, tuck tiny candy bars in my pockets and carve my smile into a thousand pumpkins. O autumn! O teakettle! O grace!” – Rainbow Rowell

37. “For anyone who lives in the oak-and-maple area of New England, there is a perennial temptation to plunge into a purple sea of adjectives about October.” – Hal Borland

39. “It’s the first day of autumn! A time of hot chocolatey mornings, and toasty marshmallow evenings, and, best of all, leaping into leaves!” – Winnie the Pooh

41. “If a year was tucked inside of a clock, then autumn would be the magic hour.” – Victoria Erickson

42. “The autumn wind is a pirate. Blustering in from sea with a rollicking song he sweeps along swaggering boisterously. His face is weather beaten, he wears a hooded sash with a silver hat about his head… The autumn wind is a raider, pillaging just for fun.” – Steve Sabol

43. “I hope I can be the autumn leaf, who looked at the sky and lived. And when it was time to leave, gracefully it knew life was a gift.” – Dodinsky

44. “No man can taste the fruits of autumn while he is delighting his scent with the flowers of spring.” – Samuel Johnson

45. “Autumn carries more gold in its pocket than all the other seasons.” – Jim Bishop

46. “Two sounds of autumn are unmistakable…the hurrying rustle of crisp leaves blown along the street…by a gusty wind, and the gabble of a flock of migrating geese.” – Hal Borland

47. “It is only the farmer who faithfully plants seeds in the Spring, who reaps a harvest in the autumn.” – B.C. Forbes
If you’re enjoying these quotes, make sure to read our collection of farmer quotes that will make you love the land.

48. “Delicious autumn! My very soul is wedded to it, and if I were a bird I would fly about the earth seeking the successive autumns.” – George Eliot

49. “Or maybe spring is the season of love and fall the season of mad lust. Spring for flirting but fall for the untamed delicious wild thing.” – Elizabeth Cohen

50. “I trust in nature for the stable laws of beauty and utility. Spring shall plant and autumn garner to the end of the time.” – Robert Browning

51. “Nothing is more fleeting than external form, which withers and alters like the flowers of the field at the appearance of autumn.” – Umberto Eco

52. “An autumn garden has a sadness when the sun is not shining…”― Francis Brett Young

53. “Autumn is a season followed immediately by looking forward to spring.” – Doug Larson

54. “Autumn is leaving its mellowness behind for its spiky, rotted stage. Don’t remember summer even saying goodbye.”― David Mitchell

Related:   80 Cute and Uplifting ‘Happy Thursday’ Wishes To Help You Wind Up the Week in Style

55. “She looked like autumn, when leaves turned and fruit ripened.”― Sarah Addison Allen

56. “Autumn is no time to lie alone.”― Murasaki Shikibu

57. “Autumn is as joyful and sweet as an untimely end.”― Remy de Gourmont

58. “When the autumn meets the tranquillity, there you can see the King of the Sceneries!”― Mehmet Murat ildan

59. “I loved autumn, the one season of the year that God seemed to have put there just for the beauty of it.”― Lee Maynard

60. “Sometimes I’m the winter tree and most of these times, a gathering of autumn leaves.”― Goitsemang Mvula

61. “Wild is the music of the autumnal winds amongst the faded woods.” – William Wordsworth

62. “The winds will blow their own freshness into you, and the storms their energy, while cares will drop away from you like the leaves of Autumn.” – John Muir

63. “Life starts all over again when it gets crisp in the fall.” – F. Scott Fitzgerald

64. “I see … the turning of a leaf dancing in an autumn sun, and brilliant shades of crimson glowing when a day is done.” — Mattie Elliott

65. “The Autumn is old; The sere leaves are flying; He hath gathered up gold, And now he is dying… Old age, begin sighing!” – Thomas Hood

66. “Autumn burned brightly, a running flame through the mountains, a torch flung to the trees.” — Faith Baldwin

67. “Of all the seasons, autumn offers the most to man and requires the least of him.” – Hal Borland

68. “You can’t hide your true colors as you approach the autumn of your life.” — Unknown

69. “It was a beautiful bright autumn day, with air like cider and a sky so blue you could drown in it.” – Diana Gabaldon

71. “Aprils have never meant much to me, autumns seem that season of beginning, spring.” – Truman Capote

72. “Listen! The wind is rising, and the air is wild with leaves, We have had our summer evenings, now for October eves!” – Humbert Wolfe

73. “I enjoy the spring more than the autumn now. One does, I think, as one gets older.” – Virginia Woolf

74. “And the yellow sunflower by the brook, in autumn beauty stood.” – William Cullen Bryant
If you’re enjoying these quotes, you’ll love our collection of sunflower quotes to learn from.

75. “Autumn is the time when nature takes her watercolor to the trees.” – Laura Jaworski

76. “Even those fallen leaves dance, on the musical wind cadence.” – Anoushka Tyagi

79. “Autumn is the mellower season, and what we lose in flowers we more than gain in fruits.” – Samuel Butler

80. “No spring nor summer beauty hath such grace as I have seen in one autumnal face.” – John Donne